Art and Design Services by Akit

I am an illustrator, designer and graffiti writer based in London

I can customise a range of items to your specifications. Design projects range from interior and exterior walls, stairs and furniture to clothing and bags.

Stencil staircase. Spray-paint.
I was commissioned to stencil a staircase in private residence in Queen’s Park, London. The brief was to stencil the owner’s favourite brands down the stairs. The effect is great.

Gentlemen Jack Barbershop. Nantwich.
Owners Jules and Zebi commissioned me to paint a large canvas for their barbershop. The 100 x 100 cm canvas features tools of their trade; combs, scissors, moustaches and beards of course! The couple are illustrated too along with their dog! I really enjoyed this project. 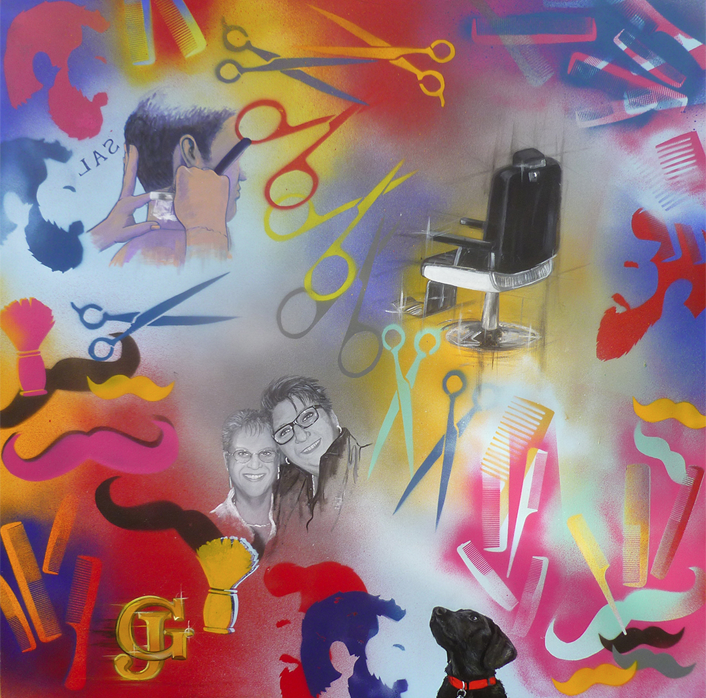 To my delight a year later Jules and Zebi invited me to Nantwich to paint the interior of the barbershop with a design extending out from the previously painted original canvas. As the couple love music I was to illustrate aspects of this including instruments and notes, all in a vibrant colours. Hugo the dog features too!

The City Chairs.
Part of an on-going project to up-cycle a series of different chairs. Each one a city theme. So far London and New York, watch this space for more. 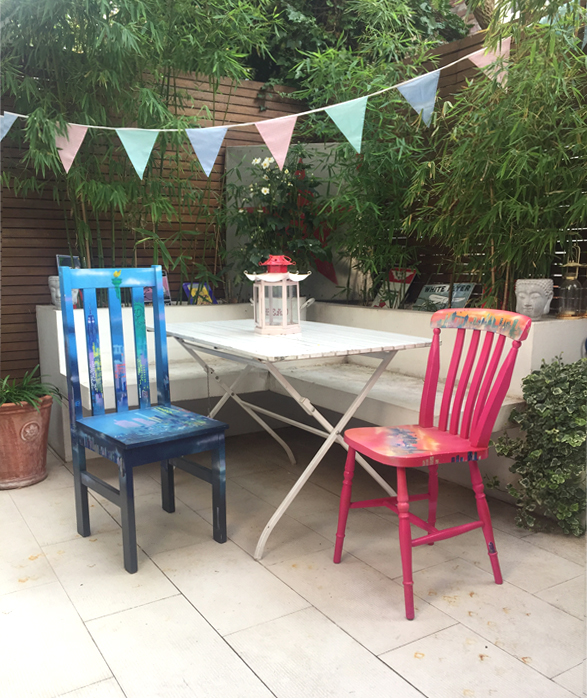 The London Chair. Spray-paint, airbrush, paint and pens.
The brief was up-cycle a chair with a London theme in fun bright colour-way. Illustrating known London landmarks such the Shard and Tower Bridge in a dusky London sunset.

The New York Chair. Spray-paint, airbrush, Letraset, paint and pens.
Second in the series of city-themed chairs is New York. The client stated as before a simple directive; blue hues and New York, New York! I chose to reflect the city with an Art Deco touch, using layers of faded stencilled lines to echo the city’s early 20th century stream-lined architecture. Next in the series of city chairs is Paris in Yellow!

Harlesden Town Gardens, London. Spray-paint.
Working with a local charity I designed and painted this wall for my local public space which includes an allotment. The brief was for the graffiti to be simple and to reflect the natural setting and blend into the surroundings as the plants grow around the piece. A highly satisfying job.

I am an illustrator and and graffiti writer based in London. I offer one-to-one art tuition for all ages.

I am available for paid commissions including illustrative editorial work, personalised canvases and customised graffiti.